How many different types of culprits might hack an organization?

The list is long, but it includes criminal syndicates, nation-state intelligence agencies, hacktivists and bored teenagers. Needless to say, those categories sometimes overlap.

But another class of attacker targeting at least some organizations is unscrupulous organizations that hire freelance hackers - aka mercenaries - to target the competition. There are no reliable estimates of how many organizations might attempt to steal and leak embarrassing information on competitors or to obtain intellectual property and other corporate secrets. But such attacks remain a threat.

Indeed, cybersecurity firm Group-IB says it's been tracking a for-hire advanced persistent threat group that it calls RedCurl, which since 2018 has stolen information from at least 14 organizations across Canada, Germany, Norway, Ukraine, Russia and the U.K.

The security firm has released a report including technical details that can be used to spot signs of attack by RedCurl. It says the for-hire group - apparently filled with Russian speakers - "goes beyond the modus operandi of simple cybercrime" by specializing in corporate espionage. It has hit construction companies, law firms, retailers and financial services organizations, many of which have been compromised via phishing attacks. 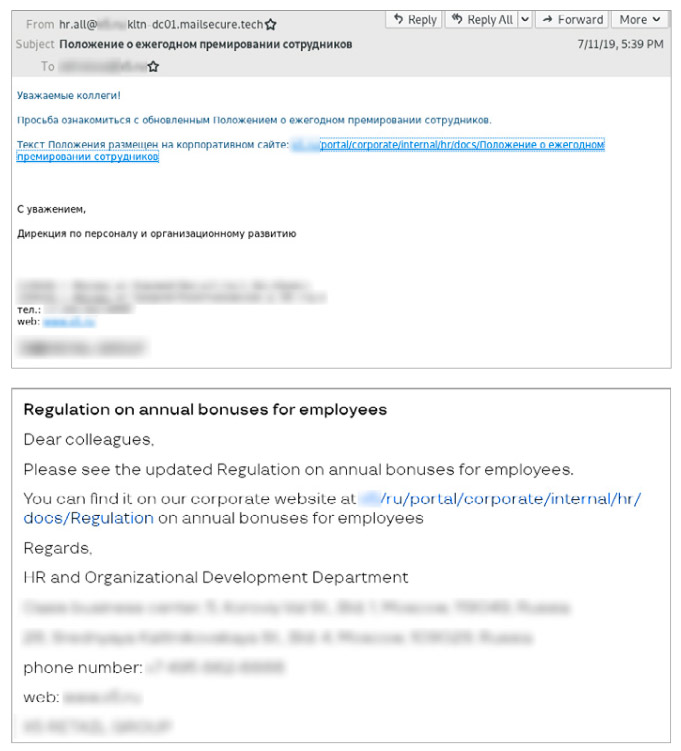 Sample of a RedCurl phishing message in Russian, with English translation (Source: Group-IB)

"It is obvious that the group doesn’t use its access to compromised networks for immediate material benefit and specializes in long-term and devious campaigns," Group-IB tells Information Security Media Group. It's alerted all of the victims that it's been able to identify and says some of them are continuing to remediate the RedCurl attacks.

The Cost of Corporate Espionage

The consequences of corporate espionage can be devastating. For example, Canadian telecommunications giant Nortel went out of business in 2009 after discovering in 2004 that hackers had been inside its network for at least a decade. Some reports pointed to a campaign sponsored by the Chinese government, which allegedly obtained the latest designs for Nortel's telecommunications gear, the loss of which may have hampered Nortel's ability to compete and hastened its demise.

“As an element of unfair competition, corporate espionage is a relatively rare phenomenon in the APT world,” says Rustam Mirkasymov, who heads Group-IB's malware dynamic analysis team. "Such groups focus on corporate espionage and employ various techniques to cover their activity, including the use of legitimate tools that are difficult to detect."

Group-IB says that RedCurl's attack methodology is similar to that of Red October and Cloud Atlas - two groups that researchers have previously said may be connected.

Despite similarities in methodologies, Group-IB says it can't prove that RedCurl is connected with either of those other groups.

The security firm also says there are no signs that RedCurl is being operated or sponsored by a nation-state. "RedCurl’s choice of victims gives no grounds to consider it a state-sponsored group," Group-IB tells ISMG. "The groups that are funded by some nations normally attack state bodies or critical infrastructure entities, which was not the case with RedCurl. RedCurl instead attacks commercial companies only, without a clear geographical link to any region."

Stealth appears to be one of RedCurl's specialties, according to Group-IB, which says that the group appears to camp out in a targeted network for two to six months.

Here's how the attacks that it has traced back to the for-hire corporate espionage operation typically progress:

The Concept of Shared Responsibility in Combating Ransomware