DOJ Seizes $1 Billion Worth of Bitcoin Linked to Silk Road

The U.S. Justice Department is looking to seize more than $1 billion worth of bitcoin that investigators have linked to the notorious Silk Road darknet marketplace, which law enforcement shuttered in 2013.

On Thursday, the U.S. Attorney's Office for the North District of California, which is overseeing the forfeiture case, announced that it has seized 69,370 in bitcoin, worth slightly over $1 billion in current market prices, from a mysterious digital wallet that has been mostly dormant since 2013 when the original Silk Road marketplace was closed down.

The announcement by federal prosecutors ended several days of speculation after researchers found that $1 billion worth of bitcoin associated with a particular digital wallet had suddenly moved on Tuesday. Some believed that hackers may have found a cryptographic key that would allow them to bypass passwords and access the cryptocurrency (see: Bitcoins With Alleged Links to Silk Road Appear on the Move).

In this case, however, it was federal prosecutors that gained access to the wallet after several months of investigations to confiscate the bitcoin, according to the Justice Department.

"Silk Road was the most notorious online criminal marketplace of its day," says David Anderson, the U.S. attorney for the North District of California. "The successful prosecution of Silk Road’s founder in 2015 left open a billion-dollar question: Where did the money go? Today’s forfeiture complaint answers this open question at least in part. $1 billion of these criminal proceeds are now in the United States’ possession."

When law enforcement closed down the original Silk Road in 2013, the FBI seized 174,000 bitcoins from the site's owner, worth about $105 million at the time. The cryptocurrency was later sold at auction (see: Own a Piece of Bitcoin History).

In an analysis released before Thursday's announcement by the Justice Department, Tom Robinson, the co-founder and chief scientist at Elliptic, a U.K. blockchain firm that tracks cryptocurrency transactions, noted that that total commissions earned by the Silk Road during its time in operation are believed to have totaled around 614,000 bitcoins, which means that some 440,000 bitcoins remain unaccounted for at this time.

Now at least some of the missing bitcoins associated with the Silk Road have been accounted for, according to federal prosecutors.

While the original Silk Road has been shuttered since 2013, federal prosecutors and law enforcement have continued to search for bitcoins and other cryptocurrency transactions connected to the underground marketplace.

The investigation later showed that the bitcoins associated with these 54 transactions had been stolen from the operators of the Silk Road sometime between 2012 and 2013, according to the federal prosecutors, and transferred to a digital wallet that is identified as 1HQ3Go3ggs8pFnXuHVHRytPCq5fGG8Hbh.

This single digital wallet was considered the world's fourth-largest bitcoin address until this week's action by the Justice Department, according to Elliptic's Robinson.

During the investigation, IRS agents found that the wallet and bitcoins were associated with a person only listed as "Individual X," according to the court documents associated with the case.

Prosecutors note that investigators know the identity of Individual X, but did not explain how they first made contact with this person. The court documents also note that while this person stole the bitcoins from the operators of the Silk Road, the cryptocurrency was never spent and remained secure in the digital wallet until authorities seized the virtual coins this week.

The Silk Road darknet marketplace first opened in 2011 and quickly turned into a forum for the distribution of illegal drugs, computer hacking services, fake identifications and firearms. At its peak, the Justice Department estimated that the forum had more than 100,000 customers and its operators took a cut of all the transactions that happened on the platform. Money laundering services were also provided (see: Former 'Silk Road' Associate Pleads Guilty to Lying to Feds). 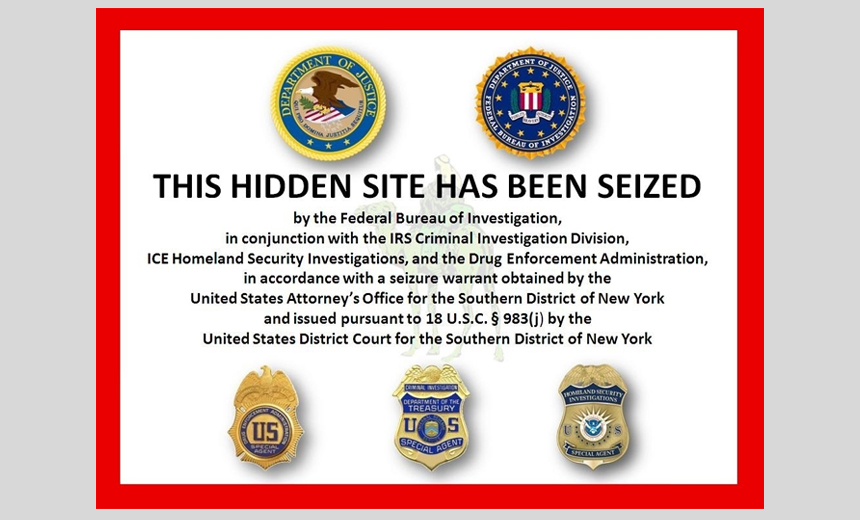 The Silk Road darknet site was shut down by law enforcement in 2013 (Source: FBI)

Ross Ulbricht, who was known by the online pseudonym "Dread Pirate Roberts," helped found Silk Road with others in January 2011 and was arrested in October 2013, when law enforcement shut down the marketplace. Ulbricht himself was later sentenced to life in federal prison.

In the court documents about the seizure of the bitcoins associated with the Silk Road, prosecutors allege that Ulbricht knows Individual X and that this person took the cryptocurrency from the darknet site.

DOJ Seizes $1 Billion Worth of Bitcoin Linked to Silk Road