The new Cyberspace Solarium Commission released its highly anticipated report this week that recommends the U.S. revamp its defenses against cyberthreats. It offers more than 75 recommendations for revitalizing U.S. cybersecurity, with a special emphasis on election security heading into November.

Among the key recommendations are: creation of an updated U.S. national cyber strategy; formation of new permanent select committees on cybersecurity in both the House and the Senate; and appointment of a Senate-confirmed national cyber director (see: White House Axes Top Cybersecurity Job).

The commission, which was mandated under the 2019 National Defense Authorization Act, is co-chaired by Sen. Angus King, I-Maine, and Rep. Mike Gallagher, R-Wis. It also includes Trump Administration officials. Its mission is to develop "a consensus on a strategic approach to defending the United States in cyberspace against cyberattacks of significant consequences," according to the report.

The report lists China, Russia, Iran and North Korea as major threats to cybersecurity in the U.S., pointing at intellectual property theft carried out by Chinese operators and the election meddling carried out by Russian actors that has damaged public trust in the integrity of American elections (see: 2020 Election Security: Sizing Up Preparedness).

The report puts much of its emphasis on election security and how other countries are attempting to manipulate the vote through hacking and disinformation (see: CISA's Krebs: 2016 US Elections Were Cyber 'Sputnik' Moment).

"If we don't get election security right, deterrence will fail and future generations will look back with longing and regret on the once powerful American Republic and wonder how we screwed the whole thing up," King and Gallagher note in the report.

One of the major findings of the report is that the U.S. government is currently in a poor position to act with the speed and agility required to secure itself against fast-developing cyberthreats. The country is being weighed down by a "labyrinth of outdated rules, laws and regulations that limit America's ability to defend cyberspace," the report states.

Calling for collaboration between the public and private sector, the report says: "The United States now operates in a cyber landscape that requires a level of data security, resilience and trustworthiness that neither the U.S. government nor the private sector alone is currently equipped to provide." 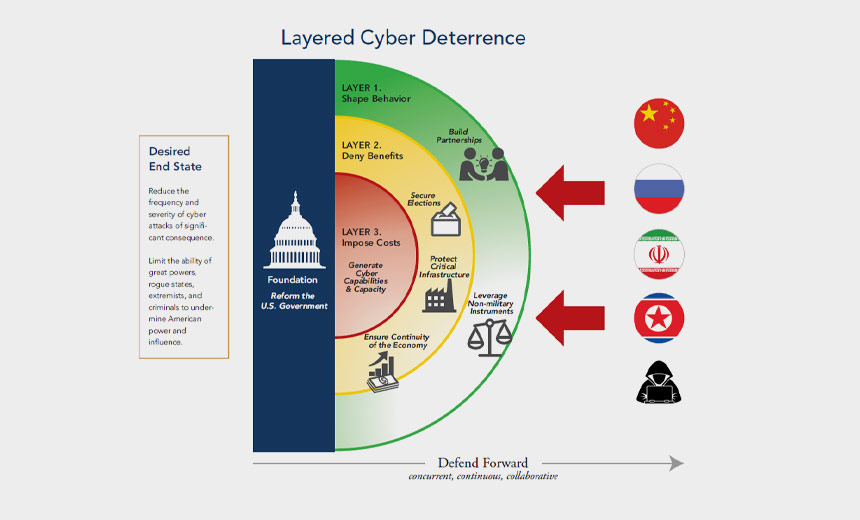 The report calls for a "defend forward" strategy of proactively countering cyberthreats. "This posture signals to adversaries that the U.S. government will respond to cyberattacks, even those below the level of armed conflict that do not cause physical destruction or death, with all the tools at its disposal and consistent with international law," the report says.

The commission’s report offers over 75 recommendations, which are categorized into six main groups or "pillars." These include:

After the release of the report, King tweeted that the nation needs a more streamlined approach to cybersecurity at the federal level.

Rep. John Katko, R-N.Y., the ranking Republican on the House Homeland Security Committee's cyber panel, told The Hill that the report and its recommendations would be followed by hearings and new legislation.