It's easy to point fingers at officials who are in charge of securing federal government IT. After all, nearly every Government Accountability Office and inspector general audit identifies flaws that put those agencies' digital assets at risk.

An analysis cited in the FISMA report indicates that nearly one-third of federal security incidents could have been prevented by strong authentication implementation.

Yet, with every step forward agencies have taken, it seems they've taken a step or two back. Still, the progress made shouldn't be dismissed.

One of the government's top IT security initiatives - continuous diagnostics and mitigation, or CDM (once known as continuous monitoring) - has been implemented at 79 percent of the government's largest agencies. And the latest rendition of the Einstein 3A intrusion protection system has been rolled out to seven agencies. The Obama administration proposes spending $582 million in fiscal 2016 to extend the capabilities of CDM at all agencies and Einstein 3A to more agencies.

Another piece of good news: agencies have achieved the goal of 95 percent of external network traffic passing through trusted Internet connections, meaning that federal data passing to and from the Internet is safer.

Before getting to some of the challenges that continue to plague government cybersecurity, take a few moments to look at the government's digital environment. The study shows that CFO Act agencies - the two dozen largest federal agencies - reported 67,196 security incidents to the U.S. Computer Emergency Response Team in fiscal 2014, which ended last Sept. 30. That's an increase of 16 percent from fiscal 2013. But, as the OMB questions, does the surge in incidents represent an increase of total events or the enhanced capability of the government to identify, detect, manage, record and respond to these incidents? Perhaps both. 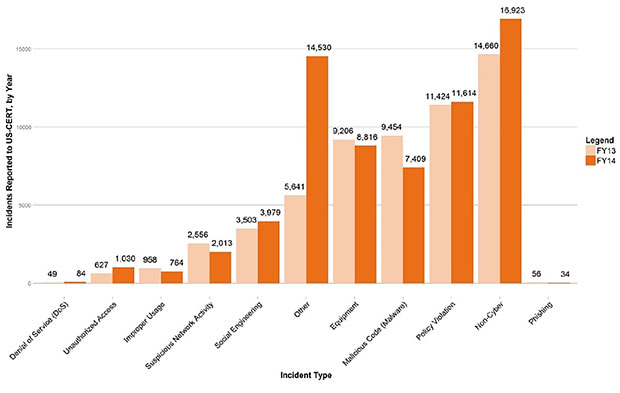 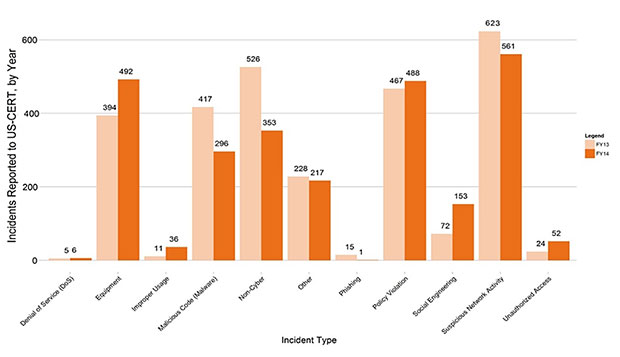 An analysis cited in the FISMA report indicates that nearly one-third of federal security incidents could have been prevented by strong authentication implementation. That's a big stat.

It's troubling that more agencies haven't implemented better authentication processes. Authentication is a fundamental part of IT security, and it's an area where security managers and agency heads should place greater emphasis.