Can Anonymous Be Trusted When It Doesn't Trust Itself? Eric Chabrow (GovInfoSecurity) • August 15, 2014

Can you trust Anonymous when Anonymous doesn't trust itself?

See Also: Gartner® Report How to Prepare for Ransomware Attacks

In-fighting among Anonymous associates isn't new, but it came to the fore Thursday when one, self-proclaimed Anonymous messenger, @TheAnonMessage, tweeted the name and photograph of what the poster claims was the police officer who shot and killed an unarmed 18-year-old man last weekend in Ferguson, Mo.

What @TheAnonMessage is doing right now is playing poker with the life of people.

Shortly after the posting, the St. Louis County Police Department tweeted that @TheAnonMessage got it wrong, and the name posted was not the officer who shot Michael Brown. On Friday, police identified the shooter as Darren Wilson, a six-year veteran of the Ferguson police department. He was not the officer identified in the Tweets by @TheAnonMessage. The killing of the black teenager and the refusal of authorities to identify the officer who pulled the trigger spurred protests and riots in the St. Louis suburb.

Twitter rules prohibit the posting of private information, which includes street addresses as well as images or videos that are considered and treated as private under applicable laws. Twitter also prohibits posting of copyrighted material; it's unclear whether the photos posted were copyrighted.

'This Is Not What Anonymous Is About'

@TheAnonMessage original tweets exposing the name and photograph of the alleged police officer didn't sit well with another Anonymous poster, @Crypt0nymou, who posted in consecutive tweets: "What @TheAnonMessage is doing right now is playing poker with the life of people. And btw, he wasn't sure. It doesn't matter if he is right or wrong at the end. This is not what Anonymous is about." 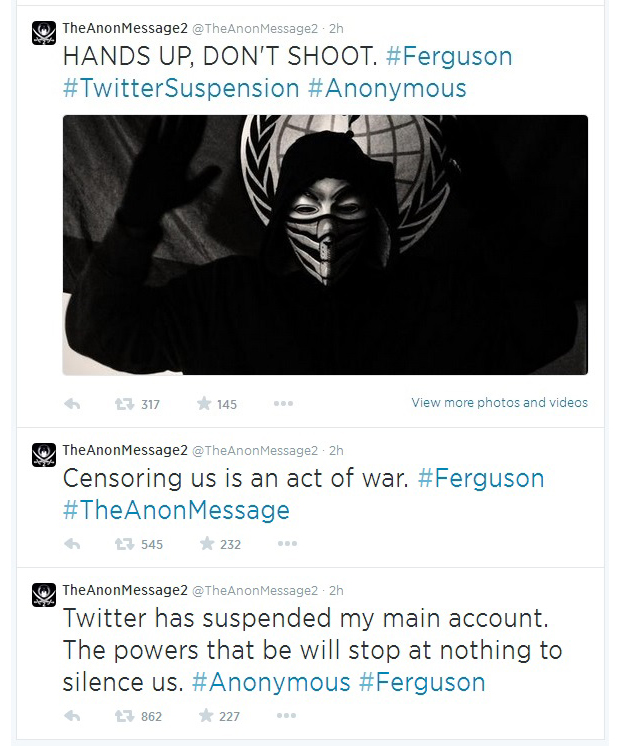 Earlier, according to @Crypt0nymou's tweets, Anonymous associates discussed the possible identities of the shooter in an IRC chat, saying hacktivists had identified as many as four suspected officers in the shooting.

"The most important thing to note if you follow these [Twitter] accounts is that there is disagreement among people who identify themselves as Anonymous as to what to do," says Gregory Nowak, principal research analyst at the Information Security Forum. "And, some were in support of this action and some weren't."

Anonymous is known for launching distributed denial of service attacks and infiltrating websites and corporate systems to cull personal information on individuals that they either threaten to or actually reveal.

The problem of defending against Anonymous is that Anonymous is more of an idea than an organization. Zach Lanier, senior security researcher at Duo Security, characterizes Anonymous as a "decentralized massive blob of pursuit of justice."

Nowak picks up on that theme, saying Anonymous is an idea that many activists subscribe to. "There's a sense of wanting to do justice when official means of justice don't seem to be available to these individuals," he says.

The perceived injustice in this case is the shooting by police of the unarmed Michael Brown by police over the weekend, with the authorities refusing to identify the police officer who shot and killed the 18-year-old African American. Racial tensions in the suburb of St. Louis have manifested with protests and riots. President Obama on Thursday called on the police in Ferguson to be "open and transparent" as they probe Brown's death, and he urged calm.

Though not an organized group per say, Anonymous can organize in a moment, says McGill University anthropologist Gabriella Coleman, author of the book "Hacker, Hoaxer, Whistleblower, Spy: The Many Faces of Anonymous," to be published by Verso in November. "At any given time, there are small teams who work behind the scenes to harness spontaneous outcries and collective anger in very effective ways, and then allow for broader participation in these different operations," Coleman says in an interview with a McGill Univesity alumni newsletter.

Nowak explains that hundreds of Anonymous sympathizers can quickly coalesce to get the information needed to infiltrate a computer system to find the personally identifiable information they want to exploit. Each one seeks useful information. One person might be involved in social engineering, another would monitor Facebook accounts to learn the answer to a lost password question. "With a large number of people doing things like that, frequently one of them will find that key" to hack an account.

Lanier says such tactics have defined Anonymous as a collaborative threat. "Reconnaissance and open source intelligence gathering are a big mainstay in organizations like Anonymous and they will use it to their advantage," Lanier says. "If nothing else, Anonymous is just pretty darn good at leveraging what's available."

A Buyers Guide for Selecting the Best Endpoint Management Solution

The Essential Guide to Zero Trust