In a separate report detailed below, Mandiant says that the number of zero-days exploited in the wild hit record highs in 2021.

Lim also observes APAC governments setting up cybersecurity governing bodies that send guidelines and best practices to organizations. "The APAC countries now have a better understanding and appreciation of the severity of cyberthreats and ... this gives people more awareness and more appreciation of how severe things can be."

Dwell time in the Americas remains steady at 17 days because "the Americas have always been much more mature in terms of cybersecurity awareness and appreciation than other regions. They have maintained their detection," Lim says.

The lowered median dwell times may also be the result of the improved threat visibility and response in organizations, the report says. Another reason for the decline is the pervasiveness of ransomware, which has a significantly lower median dwell time than nonransomware intrusions.

"Ransomware actors are a reason why the numbers dropped because, to them, time is money. They want to make the most money in the shortest time. So they will notify victims as soon as they have achieved their objectives," Lim says.

The report also shows how threats were detected across different regions. In the EMEA and APAC regions, for instance, a majority of the intrusions in 2021 were identified by external third parties - 62% and 76%, respectively. In the Americas, most intrusions - 60% - continued to be detected internally by organizations themselves. 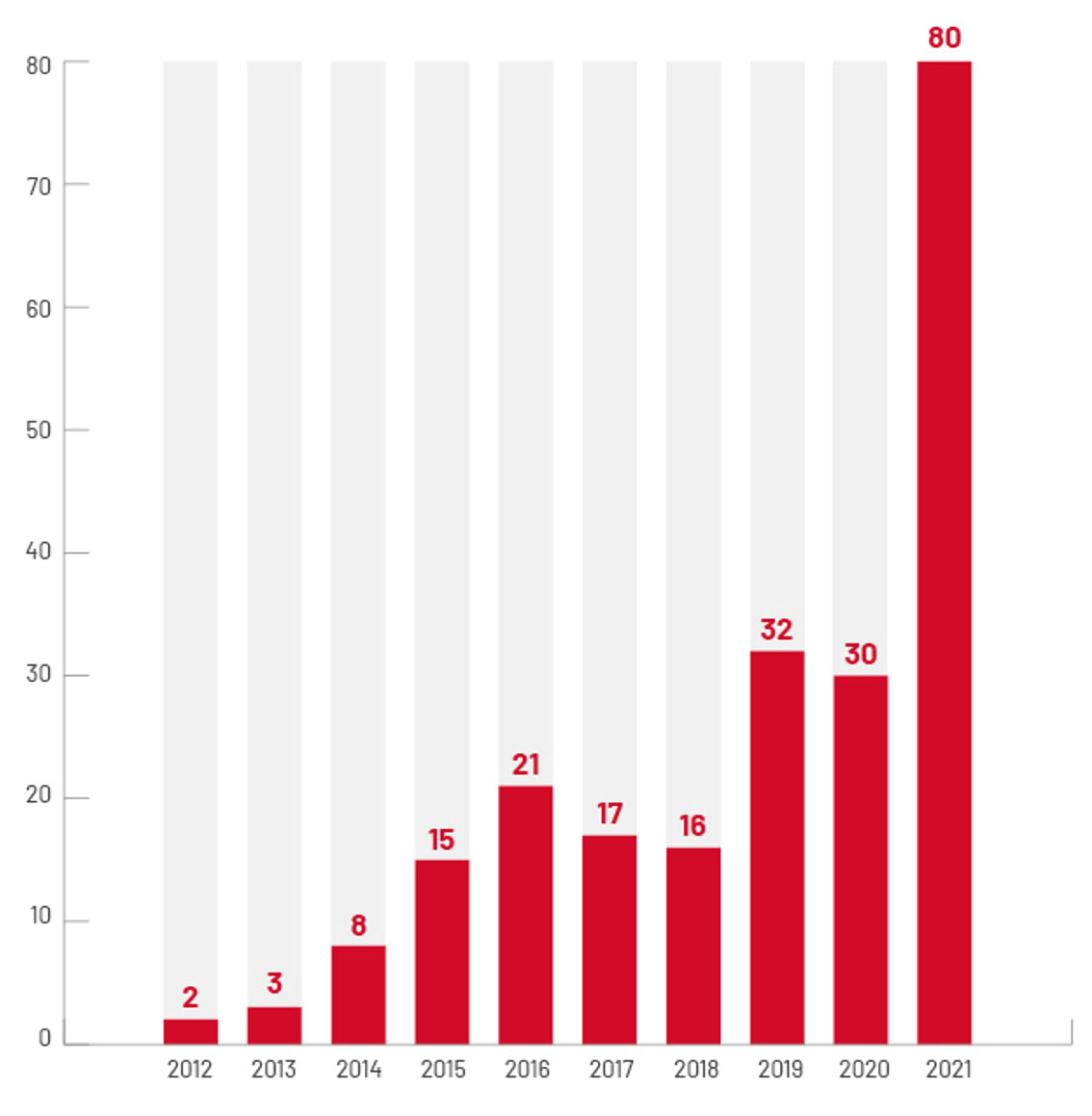 Quantity of zero-day vulnerabilities known to have been exploited in the wild from 2012 to 2021 (Source: Mandiant) 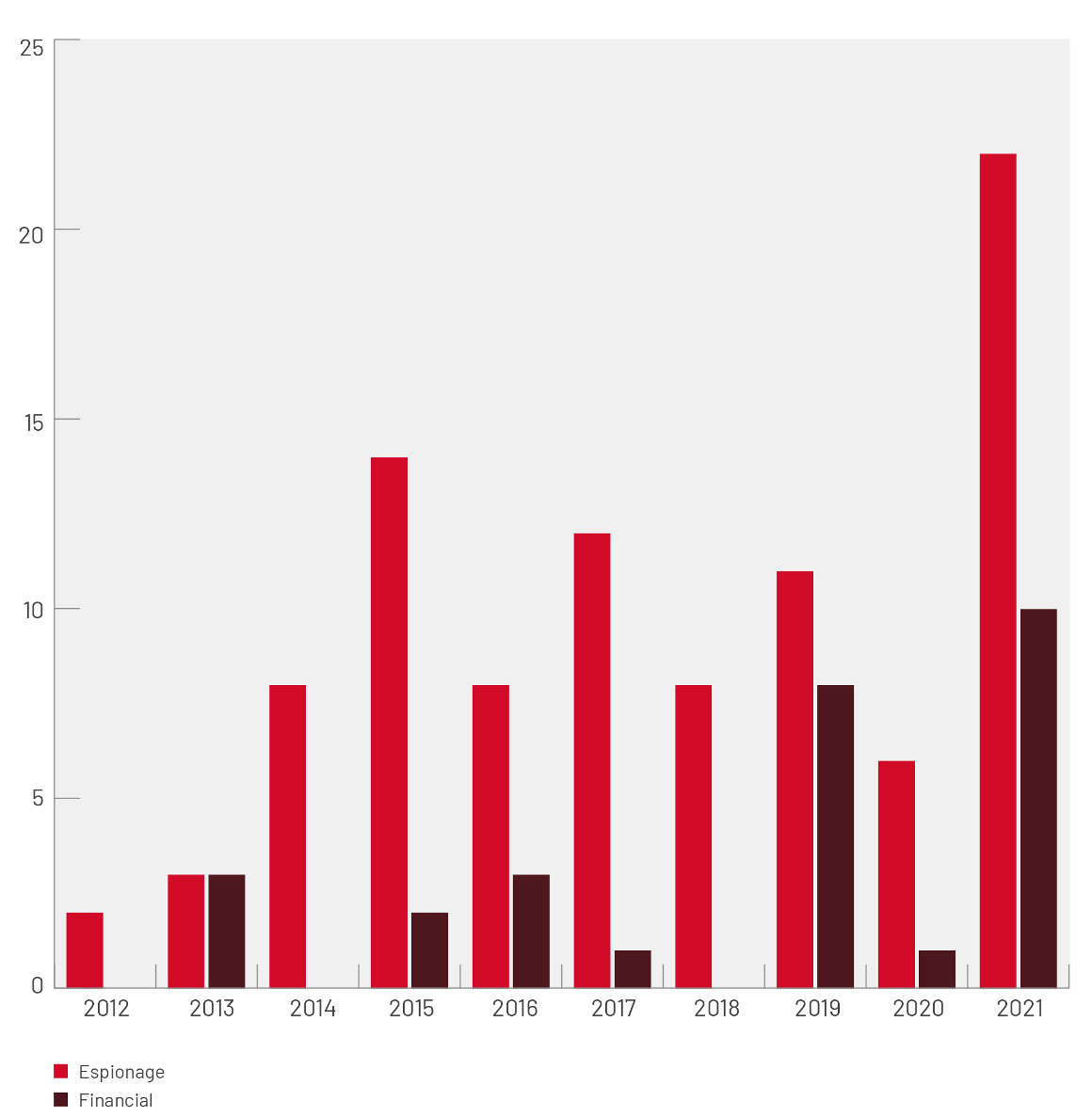 Proportion of identified zero-days exploited by attackers - including their motivations - from 2012 to 2021 (Source: Mandiant)

Lim says financially motivated actors are using more zero-day exploits because "having exclusive information about zero-day exploits is extremely valuable." Third-party vendors spend millions to buy zero-days from researchers, according to Lim. He says that because zero-days are "rare and unknown," it is very difficult to defend against them. "Essentially, everyone is defenseless against a zero-day," Lim says.

According to the report, threat actors exploited zero-days in Microsoft, Apple and Google products most frequently, likely reflecting the popularity of these vendors. The increase in zero-day exploitation in 2021, as well as the diversification of actors using them, expands the risk portfolio for organizations in nearly every industry sector and geography, particularly those that rely on these popular systems.

As companies rapidly adopt new technologies and invest in security assets, they often have shorter time cycles to deploy. Given these time constraints, they might not have a firm understanding of the security exposure or the change in attack surface as they adopt these technologies.

"If you don't understand the technologies you are adopting, you might not be aware of misconfigurations or unpatched vulnerabilities. Some do not understand the shared responsibility model in the cloud infrastructure domain. And this lack of understanding creates a lot of loopholes in the attack surface, which is exploited by threat actors," Lim says.

Lim says CISOs and organizations are unable to keep up with the threat landscape due to the large number of threats occurring on a very frequent basis. "They are unable to discern which ones are more applicable to their environment. The numbers are overwhelming, and the clients are not aware of what they should prioritize to patch," he says.

To help them prioritize which vulnerabilities to focus on, Lim advises CISOs and organizations to subscribe to threat intelligence reports from reputed cybersecurity vendors who have very strong research and good visibility into the threat landscape.

Pereira has nearly three decades of journalism experience. He is the former editor of CHIP, InformationWeek and CISO MAG. He has also written for The Times of India and The Indian Express.